Get alerts and analysis on investment matters that affect you ...

As a trainee fund manager studying for my CFA, I found myself on a steep learning curve. Analysing company accounts, valuation metrics, risk management and diversification were some of the things I needed to learn, fast. Although the technical knowledge was available through various resources, the other side was about acquiring experience and mindset. That needed being around the right people.

Fortunately, my boss – my mentor – was an experienced fund manager who also happened to be the biggest sceptic I had ever known! Soon enough though, I realised that a healthy dose of scepticism is an essential starting point for evaluating investments. At every opportunity my mentor drove home the simple but effective principle of questioning everything.

One of my earliest lessons came from being sent to a meeting with the management of Honda, the Japanese car manufacturer. During this meeting I thought I had just received breaking news. Excited to report it back to my mentor, I rushed back to the office and declared we should buy more Honda shares – adding to our already sizeable position. I said its earnings growth was set to accelerate with a new plan to increase production by 20% through a new JV in China. His raising of eyebrows suggested calming down was in order! I told him it was the CEO himself who took me through the plan in his slides. It was there in black and white, I asserted, even the head of Investor Relations confirmed it. At this point, his eyebrows reached new highs!

Later that day we reconvened and my mentor explained it was not necessarily false news – just not “new news”. We looked through the data in some research reports which confirmed his hunch that this production growth was already in market forecasts – i.e. already in the share price. As a fund we (i.e. my mentor) had already anticipated this earnings growth, explaining our large position in the stock. But I think others might have bought the story late on, encouraged by a compelling CEO.

My mentor also described the related concept of “knowing their agenda”. CEOs and Investor Relations staff are measured on how much investment they raise and, ultimately, on the performance of their company’s share price. It was important to be aware of agendas and the need to question everything and everyone – CEOs of large companies included.

Fast forward to now and the ideas of “questioning everything” and “know their agenda” are two abiding principles which, alongside the technical knowledge, remain firm in all the investment decisions I make today.

Property-Secured Loans are no different

As an asset class, I’m a fan of secured loans.  As detailed in a previous article this is an asset class that can offer consistent returns (7-8% pa) with relatively low risk.  With careful selection, one can find attractive opportunities offering a good margin of safety with solid asset-backed security.

But the property and development world is no different from the stock-market in the need to question everything. At InvestLikeAPro, I frequently receive a number of investment opportunities landing on my desk.  Most of them get consigned to the “thanks, but no thanks” folder – including some notable high-profile failures.   My job is to evaluate and select the good ones based on identifying and minimising major risks. Returns matter but are considered afterwards; we only know if something is a good deal by first identifying the risks. That is only made possible questioning what we’re told. 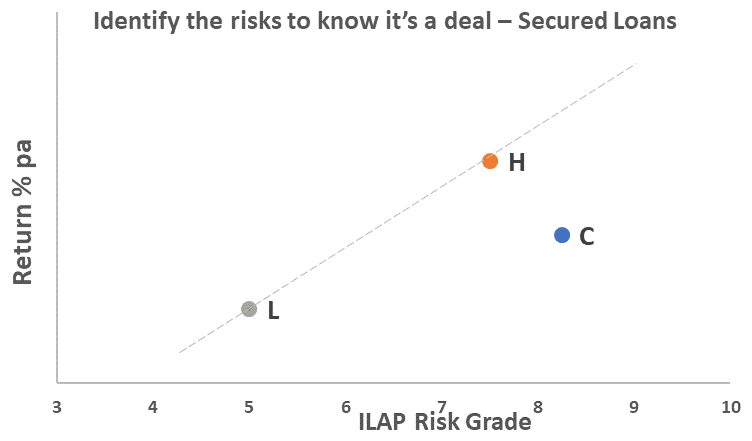 The ILAP Risk Grade is our own standardised measure of risk (1 being the lowest, 10 the highest) and we show an ILAP Risk Grade for all opportunities circulated to investors.  Risk factors that make up the ILAP Risk Grade include security, LTV, investor margin of safety, exit strategies, end-unit liquidity, counterparty risk, project profitability and sensitivity analysis.

But in reality, people are attracted to C-type investments all the time.  Why is that?   Because “C” represents Clever marketing, Charisma, Charm, Credibility (perceived) … take your pick.  Glossy marketing and/or a carefully crafted public image can be very effective tools!

With these C-qualities promoters or developers can lower our perception of risk and reduce their cost of capital.  Those C-qualities help them raise capital more cheaply relative to the actual risk profile.  Mr C doesn’t have to pay the going rate for borrowing capital – particularly if investors fail to ask questions.

[Incidentally, the “going rate” – or fair rate – for investment C can be found by drawing a vertical line from C up to the dotted diagonal line.  The point it hits the dotted line shows the appropriate return for that level of risk – i.e. it would be much higher].

At InvestLikeAPro, we aim to cut through the C(rap) and make investment decisions on real factors such as security-backing, exit strategies, liquidity, profitability, stress-testing, sensitivity analysis, risk/reward balance etc.   These factors are always our own independent assessments – created by questioning all we see and hear.

Use our S.E.C.U.R.E. framework to ask the right questions

What should you question when analysing investment opportunities in secured property/development finance?   Our S.E.C.U.R.E. framework may be useful:

Evaluate the quality and quantity of your security – assess the ranking, the LTV% (loan-to-value), the liquidity of the security, affordability and realizability of it.  You need to ultimately discover your margin of safety.   Never take the supplied RICS red-book valuation as the unquestioned truth – see below for more on this

Check how realistic the strategy is. Can all the end-units be easily absorbed, upon sale?  Are they attractively priced?  Assess exit timeframes, safety of exit and alternative exits.  If the exit is a refinance, how likely will that be? Will lenders have appetite to refinance this scheme?  If so, will a realistic LTV cover investor capital + interest?

Who are you dealing with?  Their (relevant) track record, their ability to execute to plan.

Get under the hood of the deal. Look at the project profitability, cross-check the expected GDV, costs, timeframes.  Conduct stress tests and sensitivity analysis to understand how bad things could get

Compare other deals in the market.  Are you being paid a fair return for the risk you are taking on?   Are you attracted to or avoiding the C-type investments?

Upon questioning everything, ensure the promoter responds to your enquiries

In this article I expand on the first of the list – Security.  We take on the respected, somewhat revered, RICS red-book valuation which is widely seen as the gold standard in UK property valuation.

In assessing investment opportunities, a RICS red-book valuation report gets sent to me as “evidence” of the correct value of a property or site.   Quite often though, I find myself disagreeing with the valuer’s conclusion. Certainly not because of a down-valuation.  On the contrary, it is normally because of an optimistic valuation or an overly simple methodology that doesn’t take into account all the eventualities.

Overruling the RICS valuation – a case in point

We recently analysed a loan opportunity – we’ll call it the Southwark Opportunity.  Investor security was a first legal charge over a 4-storey office property situated in a south-east London district. The headline loan-to-value (LTV) of 40% was based on a RICS red-book valuation of just over £1m. The loan was for 12 months, paying investors a return of 10% pa.

Currently arranged as 8 separate small offices, the developer already owned the property and now planned to redevelop it for residential use.  Although the building did not qualify for permitted development rights, the precedent had been set nearby, on an almost identical building.  So, the developer was very confident (rightly so) of planning approval for a conversion into three apartments. He had assumed this option would maximise his value.

So far, it looked ok on the surface: first charge security, a low LTV and a liquid location.  Now, the “question everything” principle kicks in – starting with the need to validate the security.

In turn, the LTV is only as good as its “V”.  So, having a clear independently validated valuation of your security is critical to having confidence in your margin of safety.  In this case I needed to question and validate the accuracy of the 40% LTV.

A RICS red-book valuation was done recently and having the written report to hand helped me start the process of validation.  To my surprise, the report was very simplistic and, worse, provided a valuation I simply did not agree with: over-optimistic and poorly calculated.

The valuer had assumed just one viable exit: a successful planning outcome resulting in the office to residential conversion. No other scenarios were even considered.  To arrive at his valuation the surveyor used comparable sales data to get to a final GDV and … that was it!   No residual valuation, no alternative exits. The entire valuation was based on just one (not certain) exit and even this was not done properly.

Dismissing this as inadequate, I set about doing a proper validation of the value of the security we, as investors, would be receiving.

This required asking the following questions:

Evaluating these questions resulted in a comparison of my valuations under each scenario. As shown in the chart, the RICS red-book (orange bar) turned out to be the most bullish valuation – something lenders/investors should not hope to see. 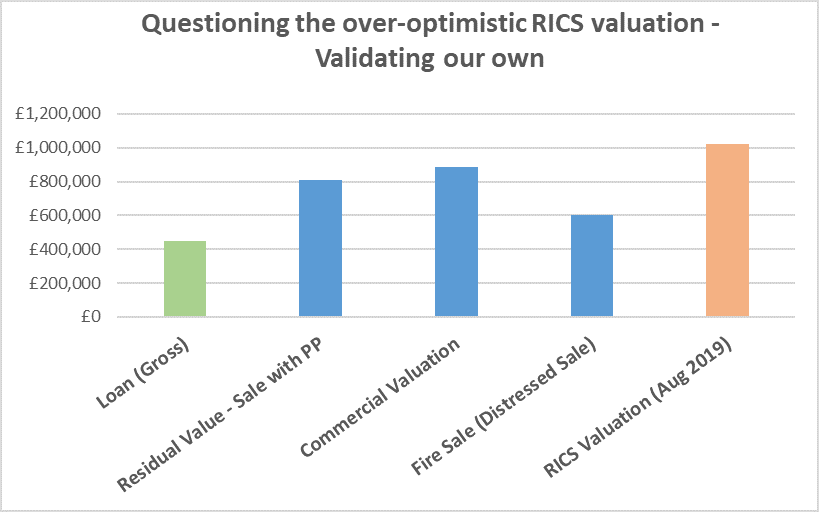 So what’s the upshot?

If we had blindly accepted the RICS valuation without further questioning, we would have loaned money with a wrong belief of 40% LTV.   Upon conducting our own independent analysis, we now have the LTV ranging between 40-68%, depending on the eventual exit strategy.

Because of the high equity in this loan (high margin of safety), and despite my disagreement with the RICS valuation, this opportunity still stacked up from a commercial standpoint.   At least the analysis created better clarity around the risks which were discovered to be slightly higher than originally advertised.

This particular one remained investable even after the analysis.  Sadly, there have been others where the effect of further questioning transformed “safe” opportunities into ones that were un-investable.  One example was an LTV that swung from an advertised level of 42% to a more realistic 93% after further questioning and analysis.  Another that passed my desk offered “priority security” but in fact put investors in negative equity from day-one.

There is real value in questioning and undertaking independent evaluation – regardless of how credibly the opportunity is presented and packaged.

To receive new investment opportunity alerts, that have been through our DD process, please visit www.investlikeapro.co.uk/liveopportunities 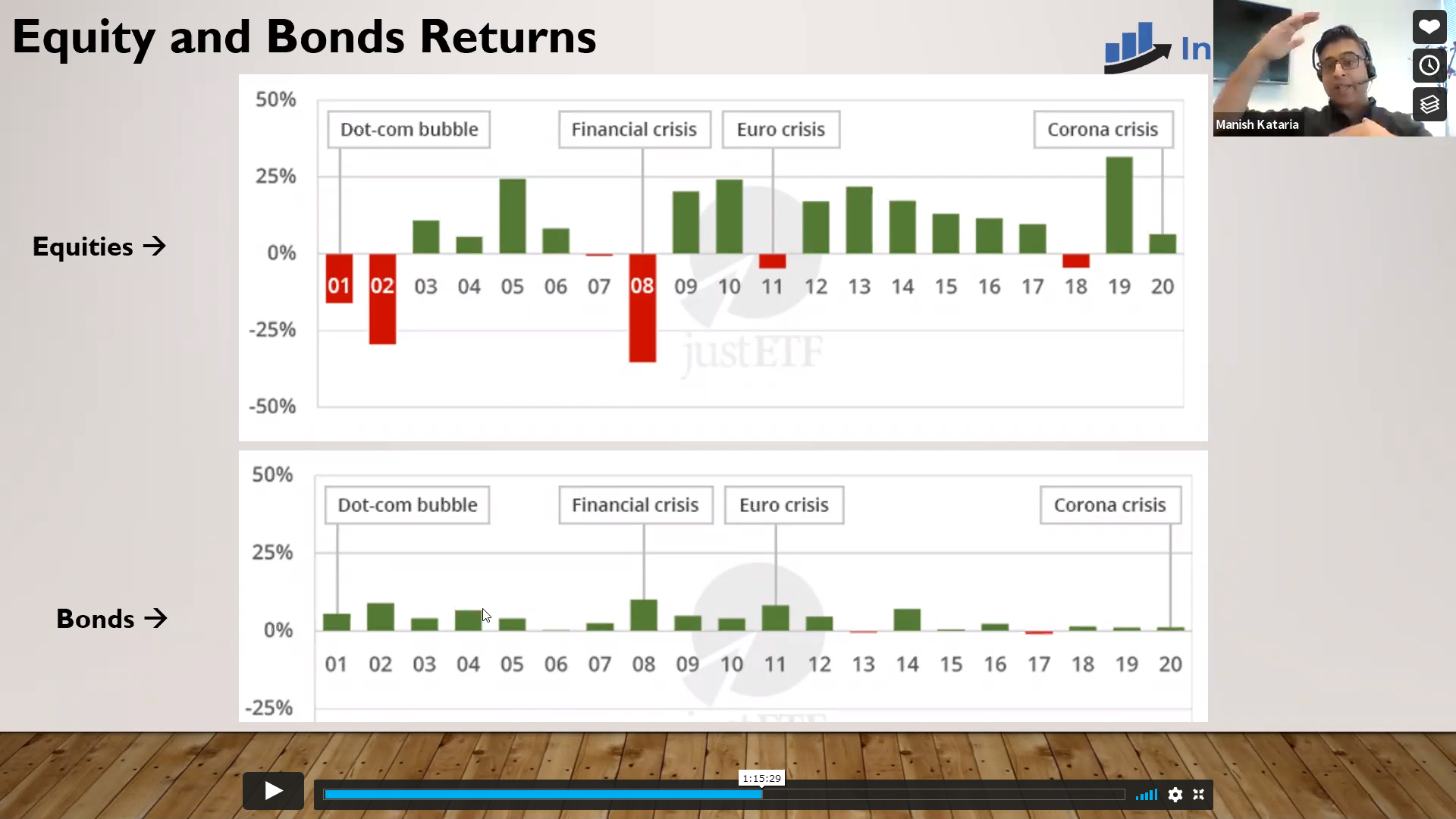 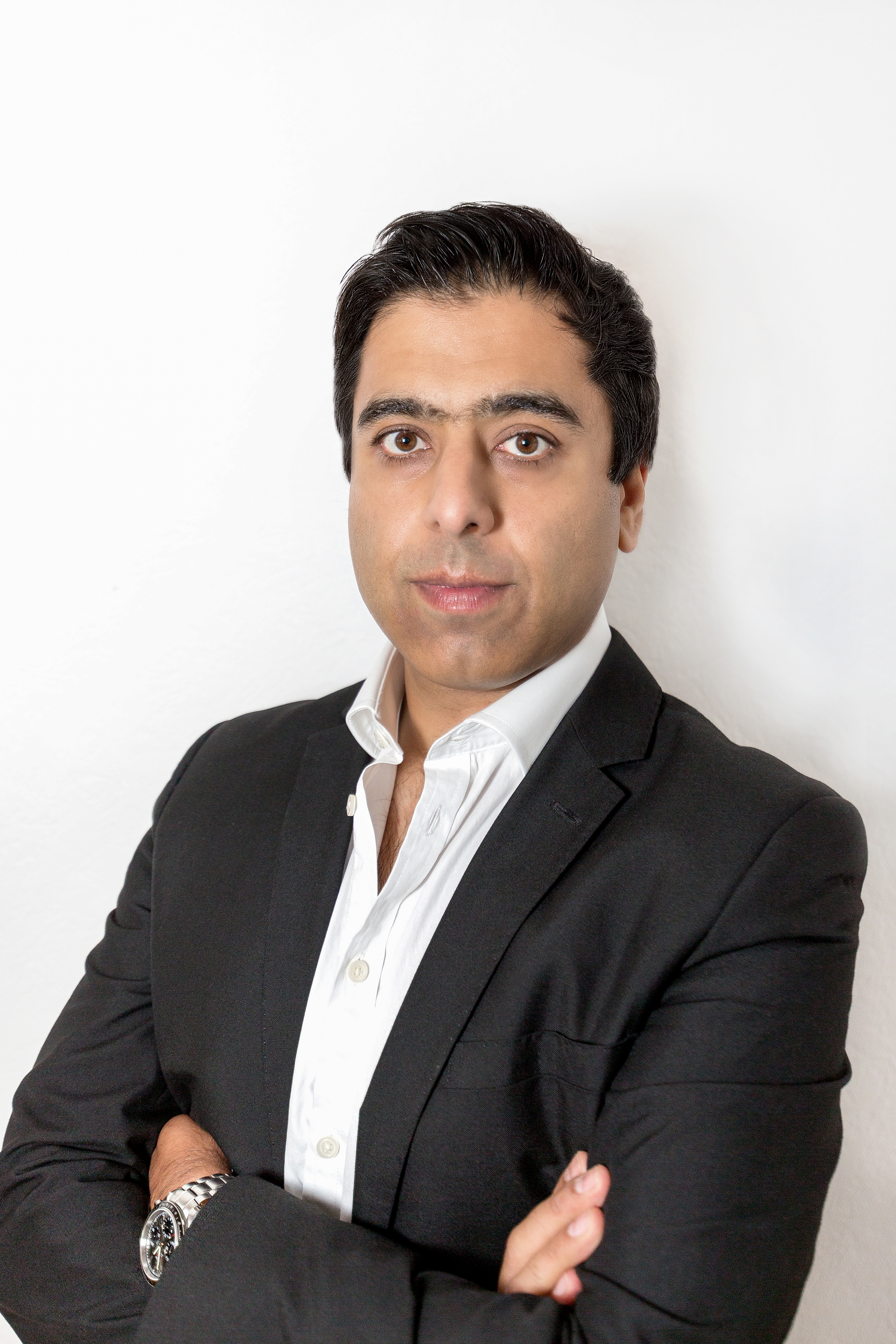 Manish Kataria is a Fund Manager. A CFA-qualified professional with 18 years’ experience in investment management and UK property. He has managed investment portfolios for JPMorgan and other blue chip investment houses. Asset classes managed include Equities, ETFs, Bonds, Funds and Options. Within property, he invests in and owns a range of assets including developments, HMOs, BTLs and serviced accommodation. InvestLikeAPro was set up so anyone can invest like a pro.
Assess deals easily - Like a Pro Receive your Investor Checklist now 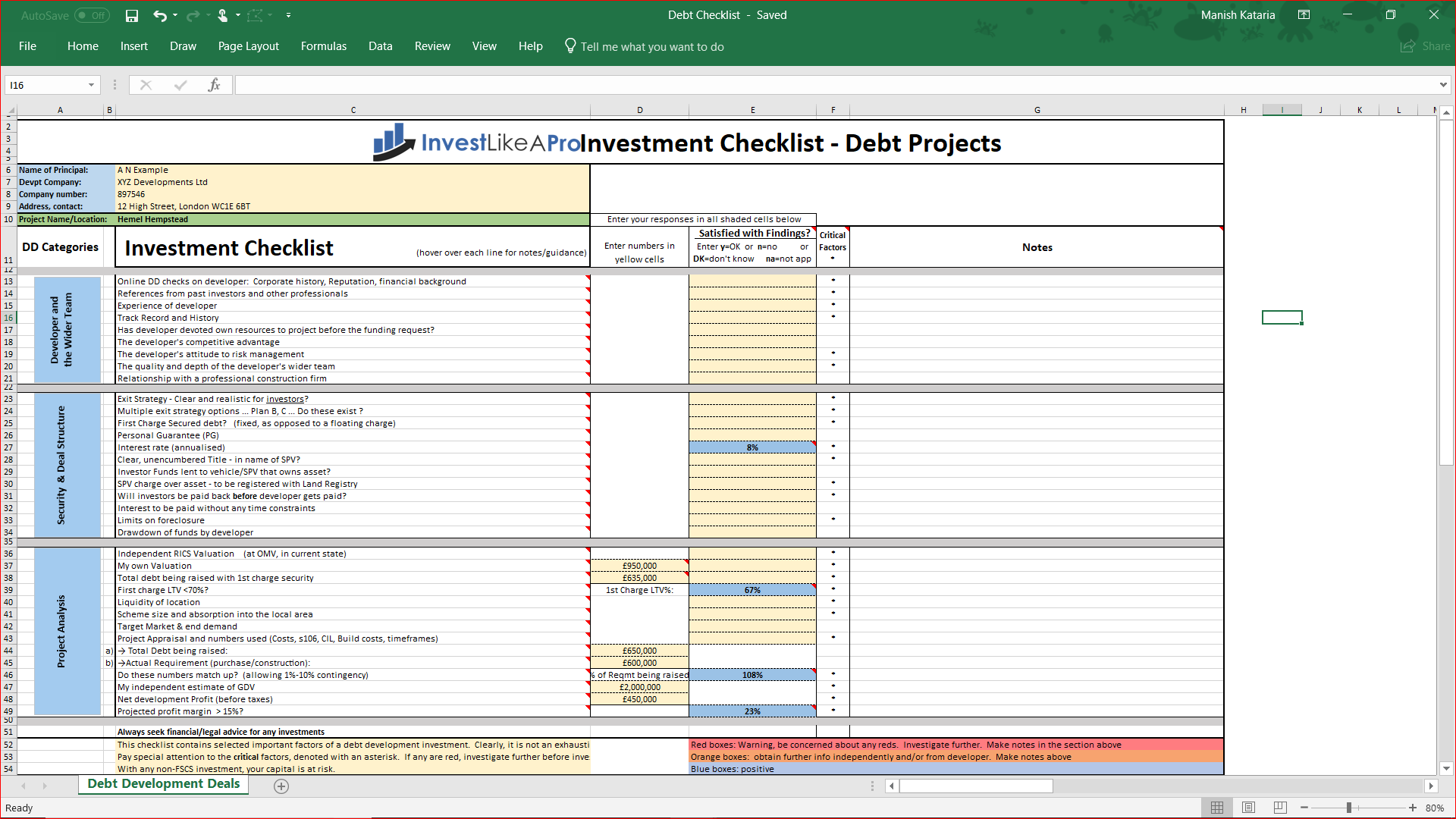 ** Your Capital is at Risk **    This is not investment advice. Markets have been in correction mode, particularly since the start of … END_OF_DOCUMENT_TOKEN_TO_BE_REPLACED

Long-standing readers will be aware of my views on inflation - i.e. how the official data is a joke.  Back when inflation was running at … END_OF_DOCUMENT_TOKEN_TO_BE_REPLACED